September 23, 2015
UPDATE:  My daughter has been using these diapers on my granddaughter for a year now and it is time for an update.  These diapers are not sufficient on their own, even when granddaughter was very small.  The pads can't soak up fast enough and leaks abound.  So instead daughter bought flour sack toweling to use as diapers.  Yes, they need to be folded, but she felt they worked really well and were easily adjustable as granddaughter grows.  She decided against having me make them out of flannel because she didn't want to use diaper pins and the plastic clasp hooky thing she uses doesn't grab the flannel as well because the flannel is too tightly woven.  She does use these shells along with the flour sack diapers, and they have worked out really well for her.  As far as the inserts go she uses them to supplement the flour sack diapers for overnight.

Now that I'm well on my way to having my cloth diaper shells, I started on my snap-in soakers.  I had made one that was just a big rectangle, and used 4 layers of diaper flannel, two layers of terrycloth, and backed with a layer of waterproof lining to help keep the inside flannel layer of the diaper shell dry.

Yesterday I found some websites that tested how much water different diaper soakers would hold.  This got me curious so I tested my own soaker as well as a couple of different fabric variations. 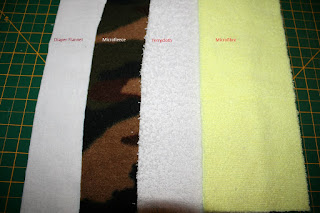 Ultimately I will be working with four types of fabric:  diaper flannel, microfleece, terrycloth and microfibre.  (Yes, that's a funky camo design on my microfleece, it's what was in my stash lol.)  The diaper flannel is known for its softness and the other three are known for their absorption.  The microfleece is also supposed to be more of a "feel-dry" fabric when wet, and from what I'm reading it "releases" poop more easily.  Sorry, but we are talking diapers here.  There is lots of information online so I won't go into the whole procedure, but my original rectangle soaker help up quite well and soaked up over eight ounces of water.  The problem is that after air drying for more than 24 hours it is still quite damp.  I then decided that I need to do what is known as a petal design, or two separate soakers of maybe 3 layers each sewn together at one end so that they separate and dry easier.  Then I changed my mind again and decided to make three layer soakers that can be combined with a snap as needed.

I have therefore made a three part system of soakers; a main shaped soaker, a rectangle booster/soaker and an overnight shaped booster.  The main soaker and overnight booster is based on this pattern I found on this website that is chock full of good diaper info. 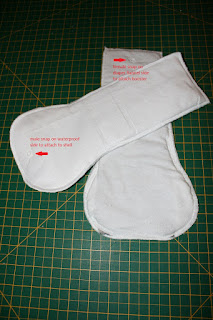 For the main soaker I used a top layer of diaper flannel, a middle layer of microfleece cloth (used for sweatshirts, scarves, lap blankets, etc) and a bottom layer of terrycloth backed by a waterproof liner.  I am hoping that this three layer one will dry faster than my original six layer one, although the waterproof backing may be preventing it from drying more quickly. 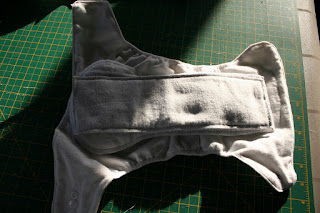 The second part is a basic rectangle three layer "booster".  The booster has the same fabric composition at the main soaker minus the waterproof liner: a top layer of diaper flannel, a middle layer of microfleece and a bottom layer of terrycloth.  There is a male snap on the underside.  Therefore it can be snapped on top of the main soaker to double the absorption (without the waterproof backing so it can soak through to the main soaker).  It can also be used alone snapping into the shell, although it could soak through to the flannel liner of the shell depending on how heavily it is wet and/or how frequently baby is changed.  I'm not overly concerned about this because I am making twenty shells, so there should be lots to work with.  This doubles the soaker "stash" of singles, especially when baby is newer and changed more frequently but with smaller wet loads.  I am making twelve of each, so when baby is a little older and a heavier wetter it will likely have less frequent changes, so I am hoping this will be an adequate stash.  I'm sure daughter will let me know if it isn't. 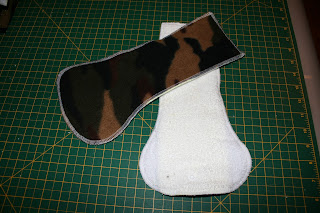 The third part is intended for overnight for older babies or heavy wetters.  Therefore I only made three of these.  It is shaped as the original soaker.  It has a top layer of microfleece, a middle layer of microfibre (what is sold in bulk lots for washing cars and whatnot - very absorbent), and a bottom layer of terrycloth: three heavy hitters in the absorption department.  I added a male snap for using alone or with just the main soaker but if using it with two soakers then you would just lay it in the diaper.  I didn't put snaps on the top side of the secondary soakers.  I could always add them after the fact if daughter wants them. 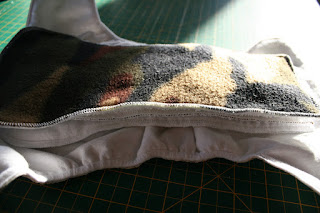 This third layer can be added to the two other layers to make a very bulky but hopefully effective overnight diaper for toddlers.  It can also be used instead of either of the other layers or by itself.  This is the only soaker in the system that has microfleece against baby's skin instead of diaper flannel.  The idea here is that it should feel drier against the skin than wet flannel.  While I understand one of the benefits of cloth diapers is earlier toilet training because toddlers don't want to feel wet, I also think it's important for everyone to be able to get a good night's sleep.  Therefore something that feels comfortable even when wet should be a good choice for overnight.

Having said all that, daughter may feel it's too bulky with all three layers.  My guess is that baby will make the final call on this one.

That's about all the research I can do without a grandbaby here yet to test on.  Ultimately daughter will decide what works for her, but hopefully she will be able to work with this system in one way or another.  After obsessing about diapers for weeks, I am looking forward to some adult sewing as well as going to the Novi Sewing Expo on Friday with my mom.  Yay us!

Popular posts from this blog

The Completed Bionic Gear Bag EDIT: Link to the second bag I made almost seven years later   Well I finally finished my Bionic Gear Bag .  What can I say?  I laughed, I cried... This pattern makes a very cute bag and overall I am happy with it.  On the other hand I did run into some hiccups and perhaps my timing could have been better with purchasing this pattern.  The Bionic Gear Bag was designed by Sally AKA Ripstitcher .  She had purchased a similar pattern from Craftsy , made it, reviewed it on her blog, designed her own version that met her needs better, and put it up for sale on Craftsy.  The internets went crazy and  major drama ensued . Now I will be honest and say that the first pattern caught my eye in the first place because I saw Sally's review of it.  When I then saw the design Sally came up with I thought it would better suit my needs, so I bought it.  Unfortunately when I bought it the drama was at its height and even though there was email communication from
Read more

And Now For Something Completely Different... 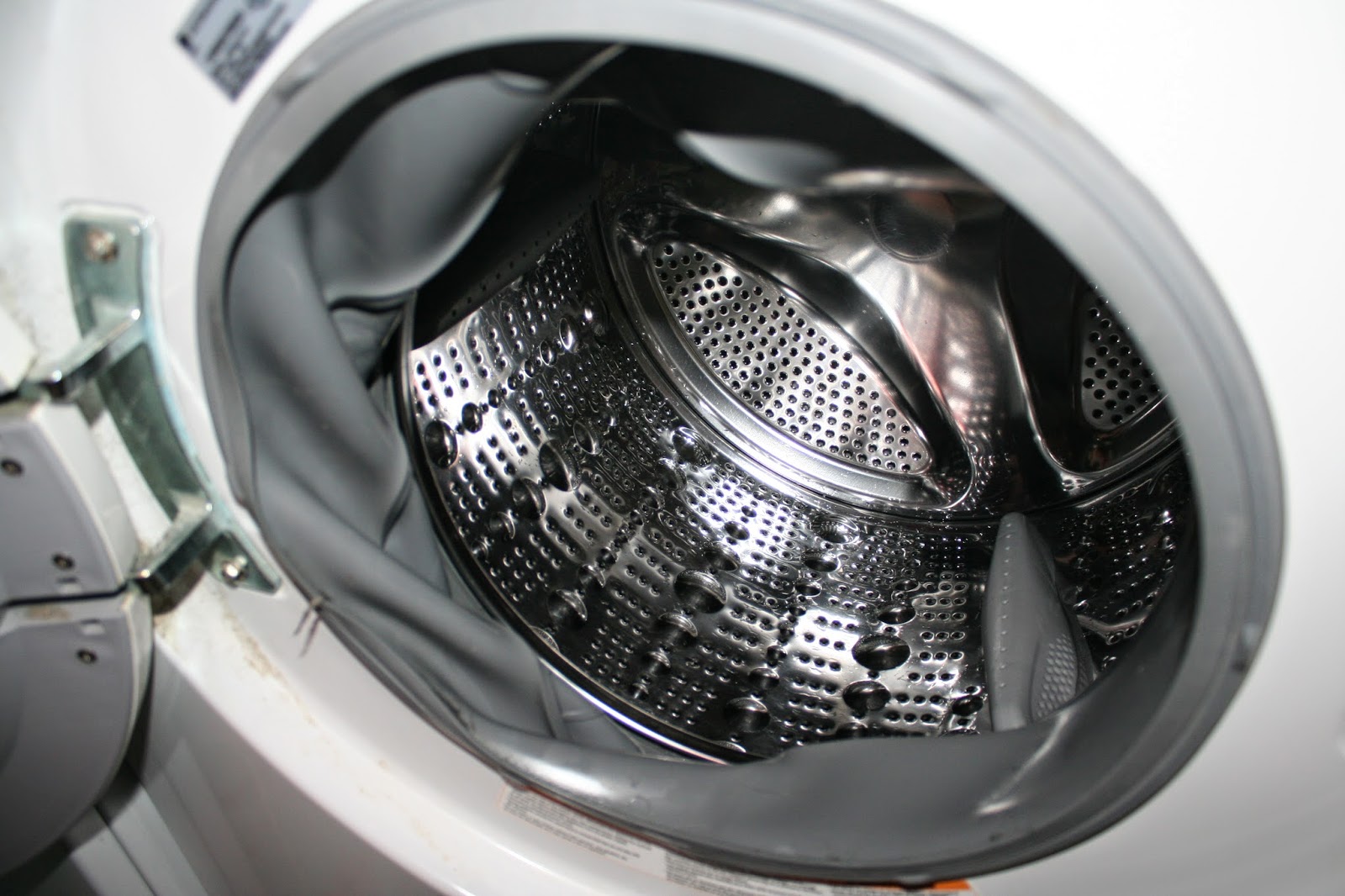 Any Monte Python fans out there?  Anyway, I was prewashing a couple of lengths of my new fabric when I suddenly heard a whole lot of banging and bouncing and general wreckage coming from my laundry room last night.  I RAN down there and found this... Everything from the top of the machine had been thrown on the floor and the rubber door seal was all twisted.  Now I've played this game before.  My last front loading washer died when my son overloaded it with about 20 pairs of jeans and tried to run it regardless.  It didn't end well. The first thing I did was look up the warranty information.  I had purchased the five year extended warranty - yay!  But it expires... last January.  Boo! I was going to bite the bullet and call in a serviceperson but thought I've got nothing to lose and it is probably a loose spring (from previous experience).  A google search quickly gave me the info I needed to break into this bad boy, usually the most intimidating part of fixing app
Read more 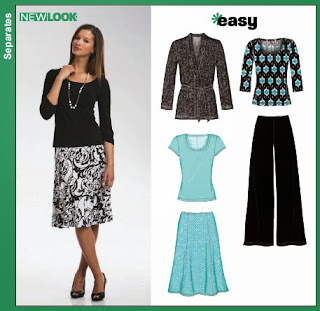